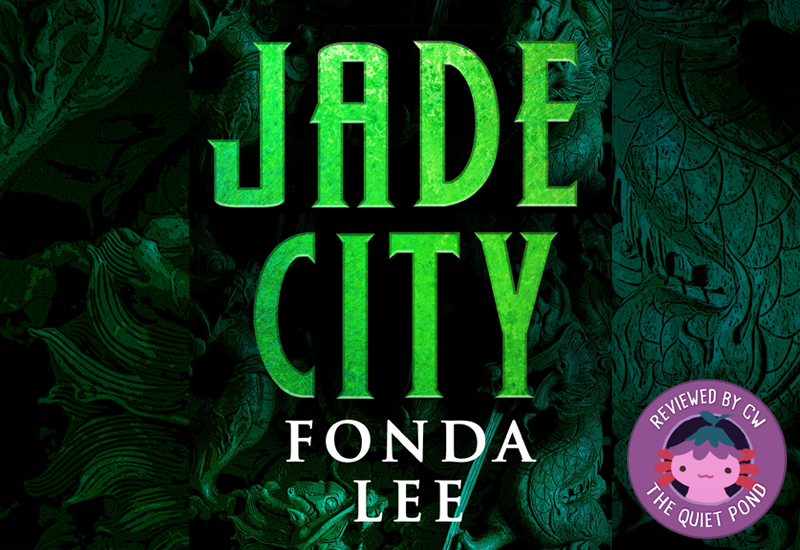 Xiaolong waddles to you, holding a thick green book and her staff in her little hands.

“Friend!” she calls, her eyes twinkling and her pink gills perky. “I just read the most amazing book. But before I tell you about it, look at the spell I came up with!”

She puts down the book, and waves her staff once clockwise, then counter-clockwise, and POOF!

With a puff of smoke and golden sparkle-dust, two perfectly fitting jade bangles appear around Xiaolong’s wrists! She throws a punch once (though her little hands don’t have much reach; she is a spellcaster, not a martial artist, after all!), then twice, and next she’s doing a quick succession of jabs, the jade bangles crackling with power.

Scared that she might hurt herself (or you), you ask her, “So… what is this book about?”

She stops, blinks up at you. “Oh yes friend! Thank you for reminding me.” Xiaolong plops onto the ground next to the book, still wearing her jade bangles, and holds the book’s cover out for you to see. “So, this book is called Jade City…”

FAMILY IS DUTY. MAGIC IS POWER. HONOR IS EVERYTHING.

Magical jade—mined, traded, stolen, and killed for—is the lifeblood of the island of Kekon. For centuries, honorable Green Bone warriors like the Kaul family have used it to enhance their abilities and defend the island from foreign invasion.

Now the war is over and a new generation of Kauls vies for control of Kekon’s bustling capital city. They care about nothing but protecting their own, cornering the jade market, and defending the districts under their protection. Ancient tradition has little place in this rapidly changing nation.

When a powerful new drug emerges that lets anyone—even foreigners—wield jade, the simmering tension between the Kauls and the rival Ayt family erupts into open violence. The outcome of this clan war will determine the fate of all Green Bones—from their grandest patriarch to the lowliest motorcycle runner on the streets—and of Kekon itself.

Jade City begins an epic tale of family, honor, and those who live and die by the ancient laws of jade and blood.

Jade City is an Asian-influenced urban fantasy that pays homage to gangster dramas, and has elements of wuxia. But it’s more than just that – Jade City is a masterpiece that has everything from gripping fights between powerful warriors called Green Bones, to the politics of war, territory battles and family, to the tender moments of love, dedication, honour, and loss.

RICH WORLDBUILDING – WITH JADE AT ITS CENTER

Set in the backdrop of Janloon, a city torn by an ever-tenuous and unstable territory war between the rivalling No Peak clan and The Mountain clan, Green Bones rule the city, possessing immense influence and power over the city’s commerce, politics, and its people. When I think about fictional places that books have taken me to, the island of Kekon where Jade City is set, is among the most vibrant and well-realised places I have visited. The first few chapters of the book may be a little dense due to the story’s ambitious worldbuilding, but once the story takes off, it takes off.

To understand the complexity and thoughtfulness of the story’s world, it’s vital to understand the importance of jade. More than just a green stone, it’s a bioenergetic stone that, when worn, amplifies the power of its user. From the very first chapter, you will come to learn three important things about jade: 1) not only does it amplify power, it also denotes social power and status, and is thus social, political, and cultural; 2) jade is integral to the action of the story, from thrilling martial art fights to the catalyst of character development and motivations; and 3) people will live and die for jade. This bears true throughout the book, and the developments? You aren’t ready.

An undeniable reason why I love Jade City is because of its cast of incredible characters. All are well-realised, their characterisations thoughtful and compelling, and have distinct motivations, goals, and struggles. I loved all characters, even those on the other side of the war. In particular the three Kaul siblings, Hilo, Shae, and Lan, push the story forward as they navigate the growing inter-clan tensions as well as their interactions with each other, layered with grudge, history, and hopes. Indeed, they were excellent drivers of the story’s themes of identity, honour, family, power, and who we are in wartime versus peace.

In particular, I loved Shae, an intelligent woman to be reckoned with but has struggles with her identity and predetermined role as a Green Bone after renouncing her heritage and destiny as a Green Bone and part of the powerful Kaul family. I particularly enjoyed the exploration of identity, duty to family, and how wartime changes us through Shae’s characterisation and perspective. Additionally, Green Bones are male-dominated, but Lee offers interesting and relevant female voices – and it is through them where I connected to the themes of the story. If you love autonomous, intelligent, and developed female characters (and, to be fair, the male characters are just as awesome as well!), then Jade City will enthral you.

SOME OF THE BEST WRITTEN ACTION I HAVE READ

If you are the type of reader the loves dialogue but finds action a little boring and you don’t mind skimming over a little bit – don’t worry, Jade City has one of the best action I have ever read. As Jade City is a blend of martial arts and crime family-esque drama, the fight scenes are violent, thrilling, and unfolds like a one-take action sequence where you’re too gripped to blink. Lee avoids cliché in her action scenes, opting for dynamic and fluid writing that stimulates the senses, as if we were watching from the sidelines, and is steeped with raw emotion, as if we can see the spirit of the fighters and the fight itself.

For those less interested in fighting action, you will be pleased to know that Jade City has plenty of political and character actions as well. Jade City is a book rich with machinations and immutable wills at odd with each other, filled with abundant momentum that, even if you put the story down for awhile, the world and the writing will pull you in as if you had never left. The story, as it unfolds, is deliciously addictive, filled with detail and complexity, and contains a fascinating subplot (featuring the frustrating but lucky thief, Bero) that are not only as compelling as but builds upon the main plot in unexpected ways.

From excellent writing to a brilliantly plotted story to incredible and well-realised characters, Jade City is unparalleled in its execution. For me, Jade City is an anchor of what I would consider a ‘gold-standard’ book; it’s the kind of book where, after reading, will make you re-evaluate all of your favourites. I often shy away from hyperbole, afraid that if I said every book was the best book I had ever read, no one would believe me. So believe me when I say this: I think Jade City is one of the best books I have ever read, and it is easily my favourite – not one of, but the favourite – book of all time.

Premise in a sentence: Tension between two rivalling clans, who wear jade that amplifies their fighting abilities, erupts into a violent war as they vie for territory, control, and the fate of the city.

Perfect for: Readers who enjoy martial art films, crime family dramas; those who love the idea of an Asian-influenced urban fantasy; and those who love rich and complex worldbuilding.

Think twice if: Jade City overall is a heavy and dense read – the payoff is worth it, but not ideal for people looking for something light.

It should come as no surprise that the first book review that I’ve written on this blog would be Jade City. I love this book immensely; as I said, it has set the bar extraordinarily high for other books, and highly encourage you all to read this masterpiece.

Your chest has that familiar tingle again, and, oh look! A little and magical plant has sprouted by your feet, just like before. A new section of The Quiet Pond is now open to you: Reviews! If you ever want to revisit a memory with The Pond, you can visit the Features page and ask the Pond for some help with memory-magic.