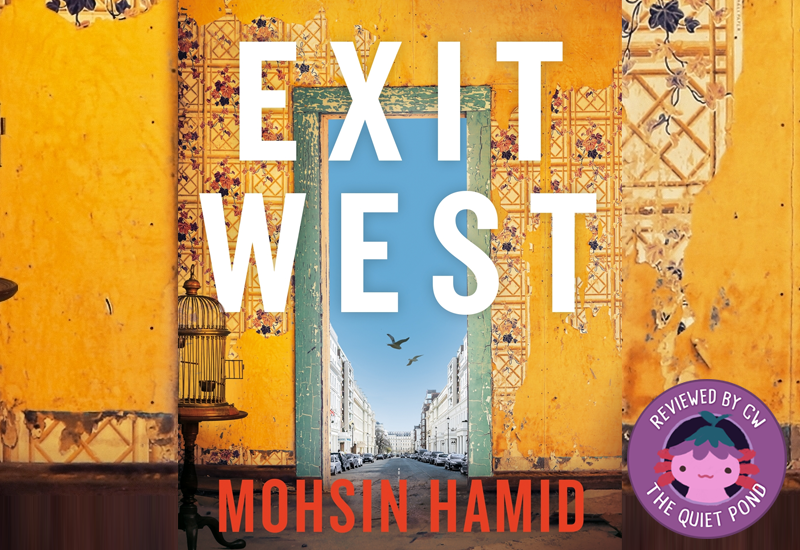 In a country teetering on the brink of civil war, two young people meet—sensual, fiercely independent Nadia and gentle, restrained Saeed. They embark on a furtive love affair and are soon cloistered in a premature intimacy by the unrest roiling their city. When it explodes, turning familiar streets into a patchwork of checkpoints and bomb blasts, they begin to hear whispers about doors—doors that can whisk people far away, if perilously and for a price. As the violence escalates, Nadia and Saeed decide that they no longer have a choice. Leaving their homeland and their old lives behind, they find a door and step through.

I had heard so much about Exit West; heard about how brilliant it was, how thoughtful, and how deep, and I have to say — I absolutely agree with all its praises. It follows Nadia and Saeed, two characters who live in an unnamed Middle-Eastern country (though the author has alluded that the city is based on his home in Pakistan), and how they escape the violence and instability of their country by escaping through a mysterious door that has appeared across the world. Transported to a new place, Nadia and Saeed grapple with losing their home and trying to make a new one. And thus, Hamid has elegantly written a profound and moving story about emigration, the refugee experience, and the relationships we have with others.

Exit West incorporates fabulism in its prose, and features magical and mysterious doors that appear at random, and transport the person to an unknown and faraway destination. The doors initially begin as rumours – as doors provide an escape of war and the ensuing violence – but later become not only a worldwide phenomenon in the world of Exit West, but also as something that represents hope. In the story, the doors represent a more hopeful future for Nadia and Saeed. As everything around them begins to crumble and their daily lives grow increasingly dangerous, finding a door and crossing it, even if it means leaving behind everything and everyone they had ever known for a place they have never known, becomes pivotal.

However, throughout the story Hamid doesn’t only show what the doors mean to just the protagonist. Scattered across the story are short snippets of other people passing through doors and the stories of how their lives change. Though at first these short snippets might seem jarring, once the story and its meaning all come together, the stories and insights into these strangers’ lives will have greater impact. Thinking about it now, the little stories and how they complement Nadia and Saeed’s stories were profound in the most beautiful and quiet way.

Uses a writing style fitting of the story

Something that others have often brought up when discussing Exit West is that they either hate or love the writing style. Personally, I loved the writing style. Across the story, Hamid uses stream of consciousness and run-on sentences, which can be exhausting and jarring to read – which I believe is the point. Using stream of consciousness and extended sentences were brilliant stylistic choices for Exit West, because not only does it perfectly articulate the emotions felt by its characters, but the stylistic writing also conveys the exhaustion of war and coping with it and its never-ending existence.

More profound, however, is that the writing style also conveyed the immense and incalculable implications of a single action, particularly in a time as tenuous and tumultuous as war time and surviving it. Indeed, Exit West begins its story as the reality and presence of war begins to seep into the daily lives of both the protagonists, Saeed and Nadia. As war and the consequences of war become more pertinent to the characters, the writing becomes more frantic, almost reflecting the growing complexity and uncertainty in their daily lives.

On being a refugee, being displaced, and how it changes you

Going into Exit West, I had no idea what it was about. All I knew was that it was set in a country torn by civil war. Therefore, reading Exit West, and discovering its story, the characters, and going through their journey with them was a breathtaking, emotional and evocative experience. Not only does the plot slowly unfold, carefully and slowly revealing and presenting the many reasons of why it was imperative for Nadia and Saeed to leave their home, it chronicles their experience as refugees. It examines how they are treated, how their choice as they flee their home to become refugees is a choice of either life of death, and how their decision to leave home is fraught with regret and optimism and a harsh relief from what they have run away from, only to endure uncertainty and violence in another form.

I think about why I love about Exit West, and I think it is because the story between Nadia and Saeed is so incredibly profound and moving. The relationship between Nadia and Saeed begins optimistic, as with most relationships where they want it to work, and although circumstances binds their destiny, their destiny also pulls them apart. In a way it was heart-breaking, to witness something that had once felt so carefree and simple as loving, and then to see how their journey transforms their relationship into something else entirely, one complicated by obligation as they navigate their challenges together but also as simple as companionship. In the end, aside from its exploration of war and its consequence, I think Exit West is, at its heart, a tender but candid story about how things change people and takes them to a point of no return.

I really hate saying this phrase, but I think this book warrants it, so here goes: Exit West lives up to the hype. With such an empathetic story, I hope that more people can read this story, see Nadia and Saeed’s story for what it is, and recognise the impact that wars beyond our borders can affect people, how they displace people, and how choice is wrenched from their hands. Exit West is absolutely deserving of all its praises, and is what I would regard as a modern-day classic.

Premise in a sentence: Two characters escape their country, torn by a civil war, through a magic door.

Perfect for: Readers who enjoy reading books with fabulism/magical elements; who want to read about refugee and migration experiences; who like profound and subtle themes.

I read this as part of the Year of the Asian Reading Challenge, and as well as my personal challenge to read more books by West and South Asian authors. Reading Exit West seemed fitting, and I’m really glad that I did pick this up. I also realised that I don’t really read much literary fiction anymore, but I’d be pretty interested to explores some diverse literary fiction that’s out there.

6 thoughts on “Book Review: Exit West by Mohsim Hamid – A Profound Story about the Refugee Experience, Displacement, and Fabulistic Doors”