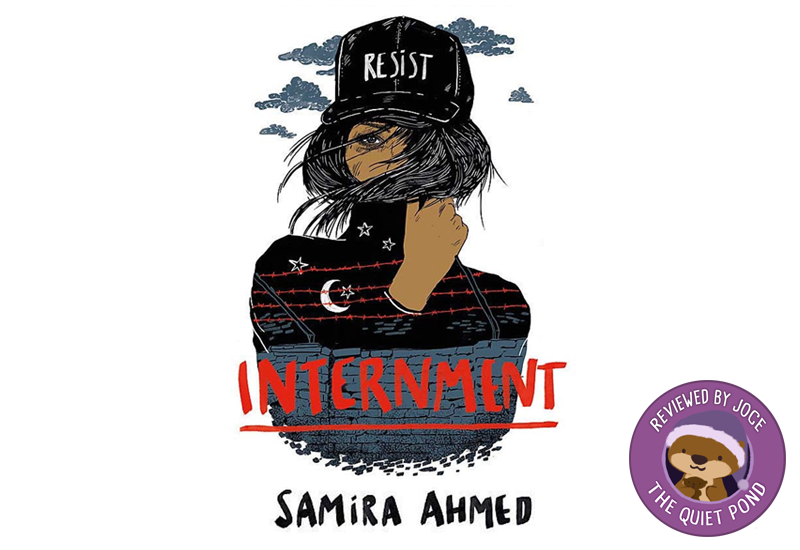 Set in a horrifying near-future United States, seventeen-year-old Layla Amin and her parents are forced into an internment camp for Muslim American citizens.

With the help of newly made friends also trapped within the internment camp, her boyfriend on the outside, and an unexpected alliance, Layla begins a journey to fight for freedom, leading a revolution against the internment camp’s Director and his guards.

Samira Ahmed’s INTERNMENT is both dystopian and contemporary, transporting readers into a terrifying alternate reality. One day, suddenly, Layla Amin’s home is stormed and her family is forcibly removed and placed in an internment camp for Muslim-American citizens. There, she forms friendships and alliances in a rebellion, hopeful for freedom. With each act of resistance against the Director and his guards, Layla and her companions become more calculated but also more frantic. They struggle to balance hope with powerlessness, two hugely polarized extremes. No one knows who to trust, and all dialogue feels tense.

The intersection of identities is at the forefront of many interactions. The internment camp is segregated in sections: “South Asian, African American, Arab, Southeast Asian. East Asian and Latinx, too, though they seem to be fewer in number”. As a direct reflection of real life, those in power in the United States are White by a vast majority. From a sociological perspective, people of different racial identities react to systemic racism in ways that may actually work against one another, resulting in a loop that unfortunately continues to strengthen racial disparity. In the internment camp, Layla states,

“[we] may all be Muslims, but we still have our prejudices and racism. It’s simpler to play on our internalized ‘-isms’ if you separate us and feed our fears – easier to make us ‘other’ ourselves and do the Director’s work for him”.

Another difference that illustrates intersectional issues is when Layla repeatedly points out the difference between the attitudes of the adults versus the teens. For example, before people began to be forced into the internment camps, a census took place where they had to state whether they identified as Muslim. Layla questions her parents about why they answered truthfully, admitting they are Muslim, and they cited the history of Muslim presence in America and what they endured to uphold Islam practice and beliefs. Their instinct was rooted in pride and protection of their children, and in their viewpoint, taqiyya, concealing one’s religion, is only forgivable to save lives under extreme duress, and the census seemed innocuous at the time. Layla, on the other hand, struggles with whether she believes answering truthfully was a good decision. Layla also admires some women in the camp who choose to continue to wear hijab, marveling at “the courage it takes to maintain that part of their Muslim identity in the face of everything.” As well, in the camp, the adults take a more quiet, almost obedient approach to everyday life, whereas the teens seem more visibly angry and instigate rebellious acts. Both have their reasons for their respective approaches, but the difference is noticeable.

One scene that alarmed and upset me the most was when Layla experiences what I believe was hypervigilance as a symptom of a traumatic reaction. To quote, “[…] when my body feels fight and flight in the same instant, everything falls into sharp focus. Almost too sharp.” I have experienced this feeling before, and upon reading this scene, I felt truly fearful. The trauma pattern in the body can take years to unlearn and rewire. While some readers may be privileged enough to close the book and escape these sensations, traumatic reactions may be a regular part of others’ lives, especially those who have been victims of bigotry.

I had the opportunity to join the Sassy Book Club’s live show discussion for INTERNMENT, and during the live show, Saajid* (from the Booktube channel Books Are My Social Life) talked about his experience traveling with his family where, at an American airport, they were detained and questioned for many hours because his brother had the Quran in his luggage. He noted that his brother was questioned the longest compared to himself and his mother. This is an example of thinly veiled discrimination, in that security checks seem “random” but in actuality, are anything but, and are steeped in Islamophobia specifically.

Before she was forced into the internment camp, Layla was dating a boy named David, whose father is an Ashkenazi Jew and whose mother is a Jewish refugee from Yemen. Unfortunately while I appreciated his role, I felt annoyed with his presence at times and thought the romance could have been mentioned a little less. As well, I think his purpose could have been easily served by a friend or family member outside the camp, and his character development was not detailed.

Another character who I thought about a lot was the Director. I have seen some reviewers saying they dislike his character because he seems cartoon-like. Samira Ahmed emphasizes his bulging veins, sweating and seething, and red face. Because of these descriptions, I also thought he seemed overblown and unrealistic. However, upon more reflecting, he could be a direct parody of another certain political figure, who, at one point seemed like a bluff or a cartoon character, but unfortunately now is reality. Of course, I am not sure of the author’s intent, but these parallels could be purposeful.

INTERNMENT provides a combination of dystopian and contemporary fiction in that it is a warning that if people do not take a determined stance against bigoted and Islamophobic policies, the ideologies behind them may become more and more nonfiction. Ultimately, the book ends on a hopeful note, urging readers to continue to rise up and take action against hateful rhetoric.

While I am glad to be writing this review, and glad that I had the opportunity to read the book, I implore you to seek out reviews by Muslim-American reviewers, as their voices and opinions are essential.

INTERNMENT is a vital read when faced with a political landscape that has dire personal consequences. Despite small improvements that I think can be made to a couple characters, Samira Ahmed’s setup is masterful and impactful.

*I obtained consent from Saajid to share his story in these specific words before writing this post.

Premise in a sentence: Layla Amin and her family are transported to an internment camp for Muslim-American citizens and fights for her freedom.

Genre: YA dystopian and contemporary