Last you spoke to Xiaolong, she said that it was important – absolutely, vitally, incredibly important – that you stop by the Pond today. “We have a really important visitor and she is my newest friend so you have to meet her!”

And so, today, you’re here on your way to the Pond, finding yourself pretty excited to meet Xiaolong’s newest friend.

When you arrive, you find Xiaolong sitting at her favourite spot by the water, and sitting next to her is the most elegant and regal cheetah you’ve ever seen.

You call out a hello to Xiaolong, and the two look up at you. Xiaolong gives you her usual enthusiastic wave – she’s happy to see you! – and the cheetah gives you a shy smile.

“Friend!” Xiaolong greets. She gestures for you to come closer. “Come meet my new friend! This is Rena! She is the author of Kingdom of Souls and I invited her here today because I wanted to ask her all about her new book!”

Kingdom of Souls? How exciting! And so you sit down next to Xiaolong, ready to listen and learn about Rena’s new book.

Hello friends, and welcome back to the Pond! 💛

There is a significant dearth of stories about Black characters by Black authors, and there is a distinct lack of fantasies featuring and centering on Black characters and African culture. Therefore, you could imagine how excited I was to hear that Kingdom of Souls, a YA West-African fantasy, was announced. And when the cover was announced? I think I gasped when I saw it for the first time. A Black woman front and center in the cover! Sitting on a throne that is unapologetically African and Afro-futurist! My excitement amplified tenfold.

Today, I have the honour and privilege of having Rena Barron join Xiaolong and I at the Pond today! I’m excited to share with you all the author interview I conducted with her. But before we go to the interview, here’s some information about Kingdom of Souls. 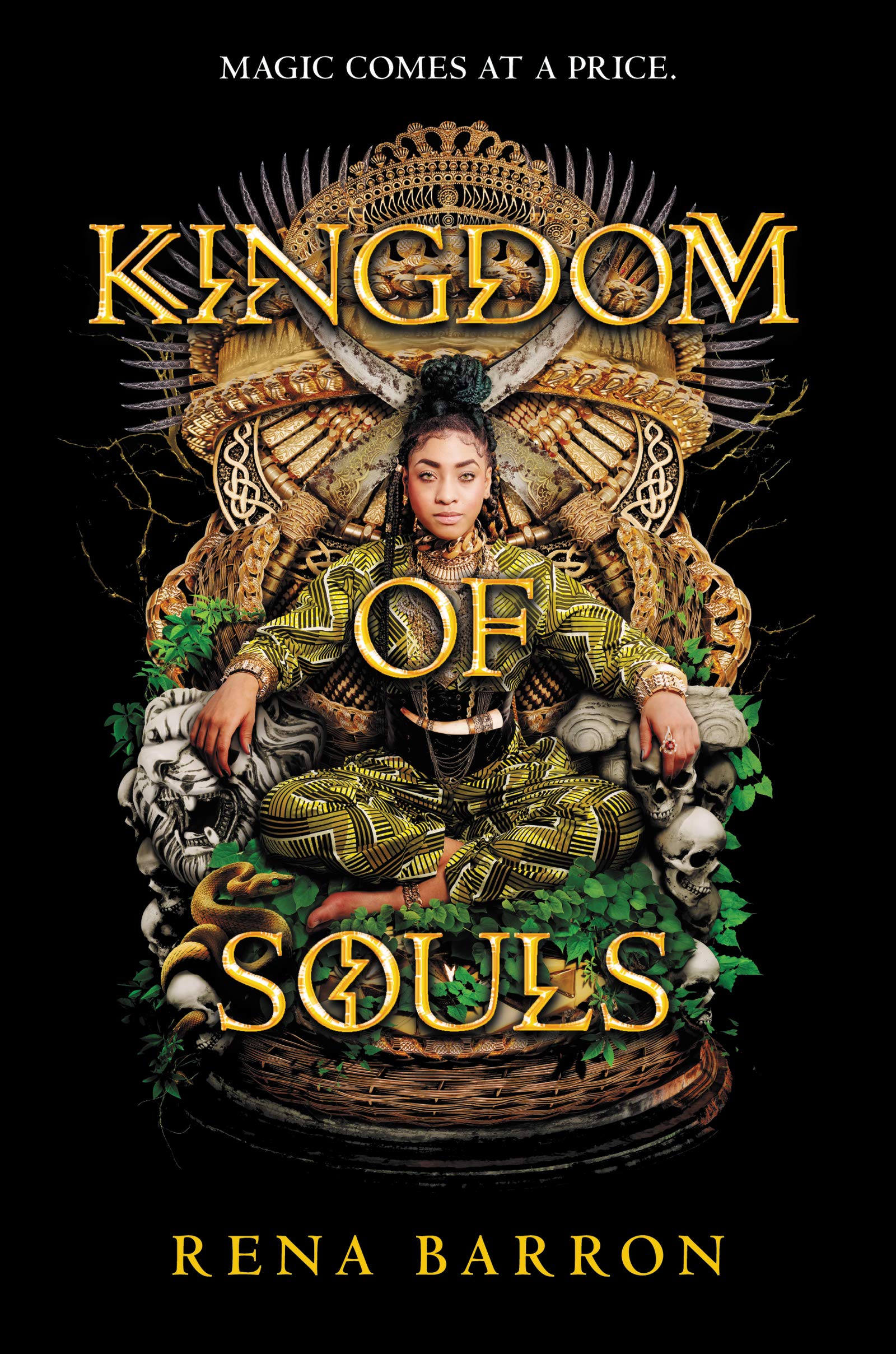 Born into a family of powerful witchdoctors, Arrah yearns for magic of her own. But each year she fails to call forth her ancestral powers, while her ambitious mother watches with growing disapproval.

There’s only one thing Arrah hasn’t tried, a deadly last resort: trading years of her own life for scraps of magic. Until the Kingdom’s children begin to disappear, and Arrah is desperate to find the culprit.

She uncovers something worse. The long-imprisoned Demon King is stirring. And if he rises, his hunger for souls will bring the world to its knees… unless Arrah pays the price for the magic to stop him.

As you know, I’m particularly fascinated by stories that explore identity, particularly marginalised identities and identities we don’t often see much of in publishing, so I had a lot of fun interviewing Rena! I hope you all enjoy reading this and I hope it makes you all even more excited to read Kingdom of Souls!

Xiaolong: Hi Rena! We are so happy to have you at the Pond today and hear more about your upcoming book, Kingdom of Souls. Can you please tell our friends out there a little bit about Kingdom of Souls?

Rena: Hi Xiaolong! Thanks for having me stop by the Pond! I’m happy to tell you a bit more about the book. Kingdom of Souls is about sixteen-year-old Arrah who comes from a powerful family of witchdoctors, but she doesn’t have magic of her own. When the terrible Demon King threatens her kingdom, she must trade years of her life in exchange for the magic she needs to stop him. But each trade brings her closer to death and to a devastating truth.

Rena: When I was young and heard stories about people who practiced voodoo in my community, it sparked my curiosity about my ancestors and their beliefs and traditions. In a small way, Kingdom of Souls is my exploration of self in relations to a culture and history that was stolen from me. Most of my life I have felt displaced in a world that sometimes doesn’t see me as Black enough, African enough, or American enough, so I centered this story in a fantasy setting that could let me explore my heritage on my own terms.

Xiaolong: How does your identity shape the story and worldbuilding of Kingdom of Souls?

Rena: When I wrote the first few drafts of Kingdom Of Souls back in 2013, I was terrified that no one would ever want to read about people like me. It didn’t help that I personally hadn’t seen or read many books that included Black characters. It was important for me to give myself permission to write a story in which I could imagine a world for people like me that didn’t rely on colonization or oppression as a plot device. Those stories are important to explore, but they do not define who we are. What pushed me to not give up on the manuscript after it failed to grab an agent’s attention back when I first queried was my desire to help make sure that future generations of Black children could see themselves reflected in books the way I never had as a child.

Xiaolong: You have mentioned that Kingdom of Souls is a story that is deeply personal to you. Can you tell us a little bit about that?

Rena: At the core of Kingdom Of Souls is a girl caught between two worlds. Arrah was raised in the Almighty Kingdom, but her parents hail from two different tribes from another land and culture. She often struggles to understand and measure up to the traditions of her parents and her ancestors, and I can relate to that consistent struggle of feeling like you don’t quite belong to either.

Rena: Those snippets of rumors I heard as a child about people in my community who practiced voodoo were always negative and dark. In Kingdom of Souls, I wanted to take this idea and strip away the biases. In the book, magic isn’t good or bad, or light or dark, but it is a powerful tool that some can wield while others would trade years of their life for a chance to possess it.

Xiaolong: Going from the blurb of Kingdom of Souls, it sounds like Arrah has to make challenging and life-changing decisions and pay steep prices for power. Can you tell us a little bit about Arrah, and what can we expect from her emotional journey?

Rena: Arrah is a person who doesn’t accept things at face value. She will always question if she’s acting with empathy and compassion. She has strong convictions, and they will lead her on a journey where she’ll have to come to terms with some difficult decisions.

Rena: I hope that readers will take away the idea that you don’t have to be special or gifted to effect positive change in your community.

Xiaolong: What advice do you have for any writers out there who are writing stories that represent them?

Rena: Write your truth, and only you can define what represents you.

Rena Barron grew up in small-town Alabama where stories of magic and adventure sparked her imagination. After penning her first awful poem in middle school, she graduated to writing short stories and novels by high school.

Rena loves all things science fiction, ghosts, and superheroes. She’s a self-proclaimed space nerd. When she’s not writing, she can be found reading or brushing up on her French. Follow her on Twitter or Instagram at @renathedreamer.

She is represented by Suzie Townsend at New Leaf Literary & Media, Inc.

Friends, I hope you all enjoyed reading this author interview and learning a little bit more about Kingdom of Souls!

7 thoughts on “Author Interview: On Worldbuilding and African Identity; A Discussion With Rena Barron, Author of YA West African Fantasy, KINGDOM OF SOULS”