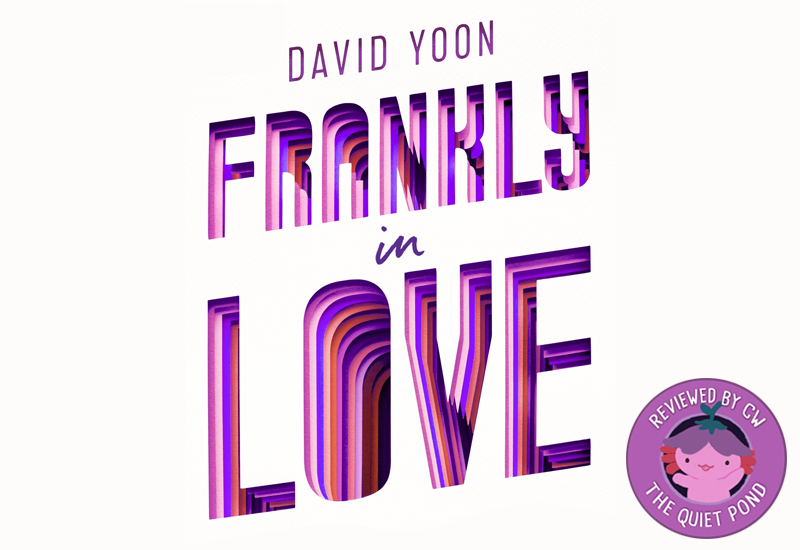 High school senior Frank Li is a Limbo–his term for Korean-American kids who find themselves caught between their parents’ traditional expectations and their own Southern California upbringing. His parents have one rule when it comes to romance–“Date Korean”–which proves complicated when Frank falls for Brit Means, who is smart, beautiful–and white. Fellow Limbo Joy Song is in a similar predicament, and so they make a pact: they’ll pretend to date each other in order to gain their freedom. Frank thinks it’s the perfect plan, but in the end, Frank and Joy’s fake-dating maneuver leaves him wondering if he ever really understood love–or himself–at all.

Thank you to Penguin NZ for providing me an ARC in exchange for a review; this does not affect my opinions of the book.

Frankly in Love is not at all what I expected – and in retrospect, I am perfectly okay with that. In fact, I’m glad. Frankly in Love by David Yoon follows Korean-American teen Frank, whose strict and traditional Korean parents prohibit him from dating a non-Korean girl. So when he falls hard and fast for Britt Means, who is pointedly not Korean, Frank devises a scheme with his childhood (and Korean) friend, Joy, to pretend to date to allude their parents’ judgement – only to fall for each other in the process.

But, Frankly in Love is not just a story about fake-dating nor is it really a romance at all. Rather, Frankly in Love is a story about cultural identity, how sometimes love can be complicated – and how those complications can be shaped by culture and family – and a stunning and complex portrayal of how family and culture are intrinsically linked together. This is a book for children of Asian immigrants – and if that’s the mission Yoon set out when writing this, he succeeded brilliantly.

This isn’t a book that’s just about fake-dating; it’s more

When the publishers of Frankly in Love dropped the book trailer prior to its release, I don’t think I can remember a time when the book community was more overcome with such palpable and electrifying energy. Fake-dating! the book trailer says, and you’re going to want to read about how Frank resolves this fake-dating mess he’s gotten himself into! All of us who love a little bit of mess were so excited to read this book (I even showed the trailer to my parents). Some of us were especially excited to see an Asian teen, specifically a Korean-American teen, at the forefront of a story that seemed to promise soft and wholesome feelings, a story about love, and perhaps a story about cultural identity and interracial relationships.

Despite what the book trailer strongly suggested, Frankly in Love is not about fake-dating – I say that not as a critique, but as a fact. I really did enjoy Frankly in Love but not because of the fake-dating trope, which is a prominent aspect for only the first half of the book. (Katie wrote a fantastic and insightful article about the marketing behind Frankly in Love and I highly recommend reading this.) Rather, this book has more to offer, and it actually tackles some pretty tough and confronting topics about growing up and life. So let’s set the record straight and let’s talk about Frankly in Love.

Told with tongue-in-cheek, about change and relationships

An important aspect of Frankly in Love that I loved was its emotional insights on how we navigate through the ups and downs of relationships and change. The storytelling is a nice balance between Frank’s sharp-mouthed and witty dialogue (that may grate for some, but I personally really enjoyed the tone!) but also has some serious and more sombre moments, which also perfectly encapsulate how Frank navigates the challenges in his life – with a little bit of tongue-in-cheek and humour, even when he’s hurting. (Which, to be honest, is how a lot of us deal with hurt.) The tone and voice of the book also fits well with Frank’s experiences of navigating the expectations and pressure of SATs and contemplating the inevitable fact that he and his friends will go their separate ways to separate dreams. Frankly in Love may be a story that explores the ‘big picture’ of Frank’s final year before college, but it also takes a moment to magnify and reflect on the details of his life: falling in love, family expectations, navigating growing up and growing out, friendships, change and its inevitability.

Frankly in Love also explores the relationships he has with two different girls: Britt Means, with whom he shares a whirlwind fall-hard-and-fast romance, and Joy Song, his childhood friend and whom Frank fake-dates. Though the outcome of what happens in the ‘fake-dating’ arrangement is predictable (and not unpleasantly so), I thought the juxtaposition between both girls was interesting and, well, intended. The insta-love (which I often don’t particularly enjoy, but I feel like that was the point in this book) relationship Frank has with Britt is all it is: insta-love that lacked substance and was ignited by infatuation and coincidence. With Joy, in contrast, the two form a meaningful relationship from mutual trust and understanding, and that shared something that holds two people together when things go terribly wrong. Therefore, I really loved seeing how Joy and Frank’s relationship grew. In addition, the mess of Frank having feelings for two people was addressed in a way that was sensitive and humanising to Britt’s character.

At its heart: about family and identity

What really resonated with me in Frankly in Love was Frank’s reflections and experiences as a Korean-American and how his world is created and shaped from diasporic identity and the immigrant identities of his family. In Frankly in Love, family and identity are explored in tandem and highlight how identity and family can be tethers to each other. I appreciated that Yoon portrays both the ups and downs of having a hyphenated identity. The ups, such as code-switching, the family gatherings that are not only a place to share food but to also feel immersed in feelings of belonging and home (for the adults) and utter boredom and struggle to entertain yourself (for the kids), and the privilege of having the life your immigrant parents have built for you, were neatly balanced with the downs, such as feeling caught ‘being’ Korean and ‘being’ American, Frank’s fractured relationship with his heritage and language, and how diasporic people can be othered and made to feel lesser when classism and racism are weaponised in awful ways.

But if you distill Frankly in Love, I think, at its heart, this book is about family – or was, to me, a love letter that Yoon wrote to his parents. To Frank, his family is a little broken; after his sister is disowned for dating a non-Korean (specifically, his sister dated a Black man, and Yoon explores and confronts the raging anti-blackness evident in Asian communities particularly of the older generation), he lives a strained yet symbiotic relationship with his parents, where most of their interactions aren’t explicitly said but are simply understood. Frank’s parents are pretty present in his life and though the relationship between them is complex and confronting, their place and role in Frankly in Love takes the story to emotional heights that I never would have anticipated when I picked up this book. Though deeply flawed and certainly set in their ‘old ways of thinking’ (that most Asian children, I am sure, will be familiar with), I loved them by the end and there were so many tender moments that made me cry.

Essentially, one of the great things about Frankly in Love is that it tries to make sense of the great mess of Asian diasporic experience, which is compounded by other life’s messes – falling in love, family expectations, navigating growing up and growing out, friendships, and change – whilst also acknowledging that the mess is inherent in the unique experience of hyphenated identity and, more broadly, part of the rhythm of being a human being. A fantastic, complex, and human portrait of being Korean-American, falling in love, and when life throws you a curveball.

Premise in a sentence: A Korean-American teen in his senior year fake-dates his childhood friend to get around his traditional parents’ rules about dating only Korean girls – only to fall in love with her in the process.

Perfect for: Readers who love messy characters; readers who want to read about diasporic and immigrant experiences; readers who like complex contemporaries about family.

Think twice if: You’re not a fan of unconventional narrative voices, or find dry humour annoying.

A huge thank you to the wonderful team at Penguin NZ for sending me such a beautiful purple/pink ARC of Frankly in Love! I loved the tote bag that came with it, and have used it almost every time I go out. (Xiaolong looks pretty cosy lying on it, huh?)

Xiaolong thinks that this ARC of FRANKLY IN LOVE suits her flower hat. 😇🌷✨ – FRANKLY IN LOVE by David Yoon is about a Korean teen who, following his traditional Korean parents' disapproval of dating a white girl, fake dates a Korean girl. But what if they fell in love? aha ha, just kidding… unless…? 🤔 – I am so lucky and so grateful for this delightful book mail?! Not only did I receive this gorgeous ARC, I also received this really nice tote bag! 😍 Thank you so much @penguinbooksnz! ✨

Anyway, reading this book was such a privilege and my heart is happy that we’re getting even more books about diasporic experiences, especially centered on Asian characters!

15 thoughts on “Frankly in Love by David Yoon – More Than Just Fake-Dating; A Story About The Intersections of Family, Identity, and Love”