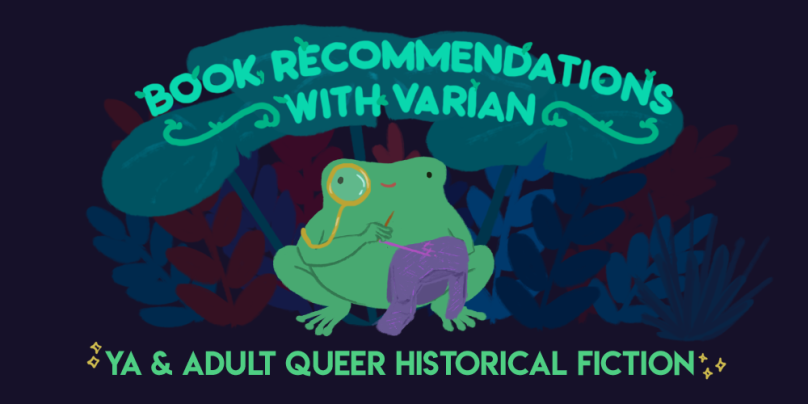 What makes historical fiction even better though? When there’s queer rep! Queer identity and queer people have always existed, though historic (and some that still even exist today) oppression made it impossible for queer people to live their truest and most authentic selves. Historical fiction gives us the opportunity to explore and imagine the complex and fraught experiences that queer people had, the ways they found happiness, freedom, agency, and themselves.

Without further ado, here are some of my book recommendations for young adult and adult queer historical fiction! I haven’t read some of these books, but I’ve recommended those that were highly praised by my co-bloggers or other readers. (On that note, a huge thank you to my co-bloggers Joce and Skye for helping me put this list together!)

Goodness, I need to read this book so badly. Friends of mine have called this book as a ‘love letter to the LGBTQIA+ community’ and an emotional and beautiful story. Add this to your TBR and read this book with me, friends – I can tell it’ll be a good one.

The Gilded Wolves by Roshani Chokshi

Although The Gilded Wolves has fantasy elements, I couldn’t resist including this book in this list for its rich historical context. Although queer romance isn’t the focus of this book, this book does have queer characters that I adored.

Add The Gilded Wolves on Goodreads.

This released only this year and it sounds absolutely delightful. A horror-historical fiction inspired by Hungarian noblewoman, Elizabeth Báthory – otherwise known as the Countess Dracula, known for bathing in blood to retain her youth.

Dread Nation has been on my to-read list since forever and now that I’ve delved into this book a little more – did you know that this book has queer characters? I didn’t either!

Swimming in the Monsoon Sea by Shyam Selvadurai

An ownvoices story that takes place in Colombo, Sri Lanka and written by a gay Sri Lankan-Canadian writer. This was recommended by one of my co-bloggers, Joce.

Add Swimming in the Monsoon Sea on Goodreads.

All Out: The No-Longer-Secret Stories of Queer Teens throughout the Ages edited by Saundra Mitchell

I love anthologies and word is that All Out is, apparently, as fantastic as they come. Such a fantastic collaboration among great writers too (and the great thing about anthologies is that if you are not comfortable reading a story by a particular author, you can skip it!).

Add the All Out anthology on Goodreads.

Under the Udala Trees by Chinelo Okparanta

My co-blogger Joce recommended that I add this book to the list! I haven’t read this book myself but this book sounds like a must-read.

Add Under the Udala Trees on Goodreads.

The Seven Husbands of Evelyn Hugo by Taylor Jenkins Reid

One of my favourite books but heck! The Seven Husbands of Evelyn Hugo is a roller-coaster of emotions (both good and bad) and will make you feel pain (in the absolute best way).

Add The Seven Husbands of Evelyn Hugo on Goodreads.

That Could Be Enough by Alyssa Cole

I came across this some time ago when looking for f/f content and now I am delighted to share That Could Be Enough by one of romance’s queens, Alyssa Cole, with you!

Add That Could Be Enough on Goodreads.

The Lady’s Guide to Celestial Mechanics by Olivia Waite

I have seen this book praised to the heavens by Fadwa at Word Wonders and Kate at Your Tita Kate; two bloggers and readers whose opinions I hold to the highest esteem. I haven’t read this book yet, but feel fairly confident recommending this book to you all!

Add The Lady’s Guide to Celestial Mechanics on Goodreads.

Joce also recommended Cantoras and nothing to say but the utmost praise. Looking through the Goodreads reviews for this book, it seems that Joce’s praises for this book are echoed across the board. Time to pick up this underappreciated gem!

In light of recent discussions and those who may have strongly mixed feelings about The Gentleman’s Guide to Vice and Virtue – whether you liked it but feel weird or sad or bad about liking it; you’re totally valid and this was not your fault! – I hope this post helps you find a new and exciting read that you can dive into. Lastly, I purposefully included stories with f/f romances – and was delighted to do so! Perhaps now people can save their breath from saying that there are no f/f books out there.

9 thoughts on “Book Recommendations: YA and Adult Queer Historical Fiction”