One of the understated effects of representation that most marginalised readers will know is that seeing yourself on the page can create an unexpected domino effect: when you finally find a book that’s a mirror into your identity and your experiences, it creates an insatiable hunger to find even more mirrors. Several of the guests in our Asian Heritage Month guest feature series have spoken about what it means to reflect on the lack of Asian characters in literature — but what if the idea of having an Asian character never even crossed your mind?

I think something that we can be reflective about is how lack of representation not only deprive readers of characters that look like them, thus empowering them and show them that their stories matter, but also deprive readers with the very idea that they can have characters that look like them. Where one is about looking for yourself in stories, the other is about how we never looked because we never knew it could exist.

When I read May’s piece, this really resonated with me – because like May, growing up I never imagined that book characters could be Asian. I considered it as one of those ‘facts of life’ and never questioned it. But when I read about a character that was not only Asian but had a piece of myself reflected in its story – it was life-changing, earth-shattering, and transformative.

Today, I have the privilege of having May visit us – as a black cat sitting on a crescent moon! – at the Pond today to talk about why representation means so much to her. It’s a wonderful piece, one that I love, and I hope that you will love it too. But before I share May’s piece, I’d like to introduce you to May, for all of our friends who have never met her before!

Before writing this post, I dove into May’s booktube channel and, friends, her booktube is a treasure trove of aesthetically pleasing videos, fantastic editing, and really thoughtful book reviews.

May has been making booktube videos for two years now, but in the last year, she’s started to focus more on diverse books, especially books by South East Asian writers!

Another video that I want to share with you all was May’s review of The Weight of Our Sky by Hanna Alkaf! I loved this book, and May articulates why it’s such a fantastic book wonderfully – and this is the level of thoughtfulness across all her videos. If you’ve only just discovered May’s booktube channel now, maybe consider subscribing to her channel!

May Cho: ‘Why Representation Matters to Me Personally’

I never really understood the importance of representation until I experienced it myself.

I was born to Malaysian-Chinese parents and raised my whole life in Brunei, a small country in the heart of Borneo Island where a myriad of cultures from South East Asia, brought along by diaspora, immigrants and migrant workers, co-exist.

Though our population is majority Asian, there wasn’t a lot of access to books written by Asians. Instead, our chain bookstores carried titles hailing from the States and UK and, for a long time, there was no active production of Bruneian books. In the past ten years, less than twenty works of English fiction have been published. When I was growing up, writing books in Brunei was practically unheard of. This, of course, affected the way I consumed books.

I didn’t grow up a reader, though. My family wasn’t particularly bookish. My mother didn’t tuck me into bed at night with a bedtime story. We didn’t buy books because they were too expensive, took up too much space.

“You don’t grow up consciously thinking about the race, cultures and settings in the books you read. You don’t consciously notice the absence of characters that look like you, grow up like you or talk like you.”

Reading was something I discovered myself at the age of 10 when I took my first step into a library at my primary school. It was a place I’d spend most of my school years in, fleeting in and out and about between classes and break-time.

I can tell you the kinds of books that lined the bookshelves and the kinds of books I read; it was The Babysitter’s Club, Malory Towers, The Clique. In secondary school, it was A Series of Unfortunate Events, Harry Potter, Hunger Games. I can tell you how many times I read and reread these titles and books with covers of young fair-skinned, blonde-haired and blue-eyed girls. I can also tell you how many books in the library were written by Chinese or Malays or Filipinos.

At home, my parents would tell me to stop speaking English. I spoke too much of it at school. When I was home, 讲华语, speak Mandarin. Don’t forget: I’m still Chinese.

Reluctantly, I obeyed, but at night, when I completed my homework and watched the latest episode of my Singaporean serial drama, when I was alone and in my room, I escaped into the worlds of a new batch of library books. Soon, I learnt what “brunette” was, learnt to covet Prom and Summer Vacations, looked forward to getting a driving license at the age of 16, dreamt of boarding school, knew the names of more US states than Malaysian ones and wrote stories about girls named Sierra Wells with bright green eyes and flaming red hair who attended Brooklyn High on Gateway Hill.

It wasn’t something I was actively aware of, this desperate lack of representation in fiction I consumed. You don’t grow up consciously thinking about the race, cultures and settings in the books you read. You don’t consciously notice the absence of characters that look like you, grow up like you or talk like you. It’s just something that grows and grows and grows as you continue to consume these kinds of fiction. It takes root in your subconscious without you realizing and, before you know it, your perception of what “normal” books are will have evolved to mean books written in the West, set in the West, featuring characters from the West.

It wasn’t until years and years later that I became aware of diversity in media—or at least the idea of it. It’s a discourse I stumbled into when I discovered the world of Booktube at the age of 16, then something I read a lot about on Twitter when I joined the community at 20. I understood its textbook meaning, tried to empathize with the heartfelt discussion of its importance, but of course, I didn’t truly understand its weight.

By then, Singaporean dramas were a thing of the past. I had long since become a devout consumer of American TV Shows. I even spoke like the people in them, carefully tucked away the accent I had growing up, became pedantic about grammar and vocabulary and Proper English Sentences, dreamt of writing books about characters that grew up in Massachusetts because that sounded way cooler than Brunei or Sibu or Kluang.

The first time I read a Malaysian novel was by accident.

A friend had dropped off a bunch of books at my place and one with a curved, wrinkled spine caught my eye. It was The Rice Mother by Rani Manicka, a 468-paged monster of a novel that promised a story rich in myth and magic set in twentieth century Malaysia, a novel that spans multitudinous generations and cultures and languages.

“Instead, I have started examining my own experiences and feelings for the place I grew up in—Brunei—and the place I have elusive memories of—Malaysia–and what that means for me and my identity.”

I wasn’t sure what to look forward to when I cracked open its spine for the first time. To me, it was just a book. Whether or not it was set in my home country or contained words from my mother tongue or the names of people I grew up with didn’t matter. It was as if my brain had built a barrier between what I expected to find in books and what I actually knew by experience, by memories, by living. They don’t and shouldn’t intersect.

The last thing I expected was to be thrown into emotional catharsis.

And yet, there I was.

There I was—breathless, taken aback, confused—trembling at all the parts of me on the pages. Everything was there. All the parts of my racial and cultural identity I had learnt to shed, right in my hands, unabashedly loud and proud. I couldn’t think properly. I was trembling, shaking, touched in a place so deep within I couldn’t process anything that was happening. So much crashed down on me all at once and I had barely moved an inch.

All I did was read a book.

Here was a book that told me otherwise.

Later on, I’d enroll myself in a class that taught South East Asian Literature. I’d read books set in Brunei, Malaysia, Singapore, Indonesia and then, I’d hunger and yearn for more.

Today, I consciously choose to add more books by South East Asian writers into my reading list and to support the growing writing industry in Brunei. I’d stopped writing stories set in a country I’d never been to. Instead, I have started examining my own experiences and feelings for the place I grew up in—Brunei—and the place I have elusive memories of—Malaysia–and what that means for me and my identity.

And all this may not matter in the grand scheme of things, but it has helped reshape my thoughts on the importance of diversity, visibility and representation.

All this because of one book. 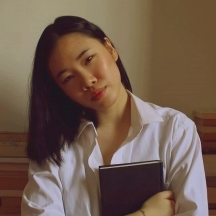 May Cho is a reader and (sometimes) writer born to Malaysian parents in Brunei. She runs a Booktube channel where she talks about her love for middle-grade, contemporary and literary fiction. Most days, she can be found with a coffee stain on her shirt, a second hand book in her bag and a journal in her arms, writing long run-on sentences.

Friends, thank you all for joining us for another Asian Heritage Month post! I really enjoyed May’s piece, and I hope you found it as thoughtful and empowering as I did. May’s story highlights the importance of representation and why it is so meaningful to so many readers – and why many of us talk about representation at great lengths.

Oh, and don’t forget to subscribe to May’s booktube channel! I cannot wait to see more of her content and I’m so honoured to have her visiting the blog today. Thank you, May!

3 thoughts on “Our Friend is Here! Asian Heritage Month Edition – May Cho, Malaysian Brunei-Based Booktuber, On Why Representation Matters to Her”