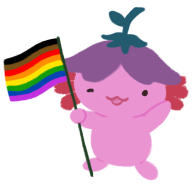 Pride Month is a month-long event at The Quiet Pond, where during the month of June, queer authors and bookish content creators are invited to celebrate being queer, queer books, and their experiences of being a queer reader. Find the introduction post for Pride Month at The Quiet Pond here.

Something that I’m very cognizant about when it comes to Pride Month is how Western-centric and US-centric Pride Month discussions can be. Not only does every country and culture have its own unique history of Pride and what it means to be liberated, but how queerness is perceived, navigated, and reconciled is different too.

When Min first pitched her piece to me, about how she wanted to talk about what it was like to grow up queer in a place outside of America, I knew that she absolutely had to be a guest at The Quiet Pond for Pride Month. I think there is so much more space that needs to be given to conversations about queer identity outside of the Western and American paradigms that are so prevalent in social media, so Min’s perspective is hugely needed – and I hope that you all will listen.

I am so excited to have Min visit The Quiet Pond today for the very first time! She visits us as a grey hawk, wearing a floral bandanna around her neck and bright red glasses! Min’s piece is utterly fantastic, and I am so honoured to have her visiting us at the Pond today.

Min: Growing Up Sapphic in Latin American and the Issue of Complex Representation

One of my first memories is chasing my sister around the house and angrily calling her a word I didn’t understand but knew to be BAD BAD BAD. I remember the pajamas I was wearing, I remember her hiding under my bed and laughing. I remember my mom sitting me down to explain I should never, ever call someone that, let alone my sister. That it was something really ugly. I remember her saying that was a word for women who liked other women.

Kid Min didn’t really understand how that was bad. You see, I was 5-almost-6 and didn’t really imagine romantic or sexual attraction of any kind. I had no idea what heterosexuality was, or homosexuality, or any sexualities. I had never stopped to think about it. I never called my sister that again. And she didn’t use that word when I came out to her almost twenty years later. She just looked on and said “Are you gonna tell mom and dad?”. No. No, I don’t think so.

That kid grew up in a medium sized city with a small town feel. In an apartment building in which everyone got along and took vacations together and went to the gay neighbor’s ranch and talked very well about him but never, ever spoke the name of his partner. That kid grew up in Latin America, in Brazil, more specifically, the country with the largest pride parade in the world. And also the country that kills the most queer people in the world. Growing up in Brazil as a queer person, as a sapphic woman, is a never ending conflict. It feels like any love can quickly turn into hatred. And in fact, much of the love you receive is laced with that pervasive hatred that many don’t seem to be able to shake.

I’m almost 27 years old, and I feel like my generation saw a lot of changes come very quickly. As a kid and a teen, everyone around me seemed so straight it didn’t even occur to me that my lack of crushes on boys and my very very dedicated friendship to some specific girls might be signs that I just… was queer. There was no space for questioning because there were no options other than straight. Being anything else was a thing for artists in big cities. Not for nerdy girls in small factory cities. There’s something very harsh in that dismissal, but it didn’t feel like that then. It was just… life.

At age 18, I moved from that small place to a big city. I suddenly lived in Rio de Janeiro, home to a huge Pride parade, known as hot spot for queer tourism. There I was, sharing an apartment with other students, ready to start the path towards a History degree. I felt free for the first time in forever, even with the weight of the watching eyes on my community back home. You can never truly step away from that, here. You’ll always find someone who knows someone who knows someone and it will give you a bittersweet feeling, the dread at being discovered somehow, mixed with the comfort and familiarity of home. Still, I was safe enough to take my first steps in a journey of self exploration.

Whenever people talk about queer characters in media always having their romantic arcs define them, I’m reminded of how foreign my experience is to theirs. Growing up in Brazil, gay people were allowed to exist in media only as comedic relief, as sassy sidekicks. Anything else was already difficult. There was one rule though: They can never, ever love and have their love reciprocated. Of course romantic experiences aren’t the defining factor of queerness, and we know that there are people in the community that don’t in fact experience romantic attraction. But, you see, there’s a lot of romance in Brazilian media. Soap operas are big and they’re the piece of media you grow up with, the thing everyone knows about, everyone discusses. They’re part of the universal experience of Brazilian-ness. And for the longest time, no expression of affection between queer characters – romantic or otherwise – was allowed. Queer characters were only allowed one facet, and I could never see myself in them.

I still remember very clearly the first time I saw myself in a character, the first time I felt seen by fiction. As I read Aristotle and Dante Discover the Secrets of the Universe, I related to Ari in a way I didn’t realize was possible. That made me notice just how lonely my experience had felt until then. I’d read queer latinx characters before, but none that resonated as much. I could see myself not only in Ari’s sexuality, in his reluctance to accept it at first, but also in his anger. In his conflicting feelings for his family, the complex kind of love there.

Every so often, we get an own voices book that takes on the task of tackling these kinds of topics. Dealing with less than perfect but yet so thoroughly loving characters and their complex, layered surroundings. Often, they’re books by QPOC. And they’re just as often met with the label of “problematic”. Not out of malice, from what I can tell. Many of these reviews seem considerate and to be angled towards protecting queer readers from something that may be triggering to some of them. And I get that. I do. But it also says something about the kinds of narratives we allow within the community we’ve created for ourselves as readers, and which narratives are brushed aside or suppressed.

When these narratives that resonate so much with real life experiences of QPOC and any experiences outside of mainstream western ones are dismissed outright and condemned for not being clean enough, or pretty enough, it can do real damage to those that have been feeling alone this whole time. In the zealous effort to protect the LGBTQ+ community of readers, one can further alienate some of its most marginalized members.

Within the bookish community, complicated subject matters, when outside what is accepted and seen within western society, are deemed wrong and problematic by default. More than just a conversation about how complex, ugly truths also need to be present in literature, this is about how so often, the criticisms made to those stories rely on looking down on our cultures, on cultures with which white westerners cannot relate. It’s a judgement that also ends up being a judgement of us as people and as products of the society which raised us. And it’s one that is reliant on the West’s superiority complex and its time honored tradition of looking upon what it can’t understand and see lack of civilization. Not only that, it requires a willful ignorance about the roots of homophobia in those countries it judges, and of the role western invaders and colonizers played – and still play! – on that.

In the end, we find ourselves in a situation in which the only way we can honestly portray the world as we see it is if we end it in total and complete tragedy. The only way we can see the complexities of our cultures, the love and comfort of a home that has plenty of ghosts but it’s still home nonetheless, is if we deliver it to the white western audience in a banquet of sadness and pain. Accepting our happiness within our contexts is so much more complicated for people outside those contexts than accepting our misery. Our happiness must come on other culture’s terms or it mustn’t come at all.

But really, isn’t happiness within the complex existence that we have something nearly revolutionary? Those stories can be complicated and end up labeled as problematic by those who don’t live them, but they can still be happy stories. There should be happiness shown even in the worst of conditions and grayest of gray areas because that’s where most of us reside. And while protecting our community from what could harm it is a worthy pursuit, I urge any and all readers to consider other perspectives before completely throwing something away. Don’t simply talk about boosting POC voices, but also listen to them. Pay attention to the context you might be missing, and give yourself a chance to see the world through someone else’s eyes. And let the lonely, confused and lost teens have the chance teen me never had; the chance to see themselves in a multitude of narratives, in various character arcs, various roles, happy, sad, bittersweet. Let them see themselves be real. 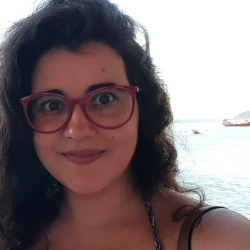 Min is a sapphic Brazilian dedicated bookworm just trying to share the love of books with the world. She has a passion for travel, hockey and politics that sometimes get in the way of her book reading, but not for long. Min loves diving into diverse books and finding out about new marginalized creators making the world a more awesome place. A historian trying not to procrastinate too much on her dissertation, Min can be found at any library or bookstore that will let her in, usually going right to the SFF section, with frequent visits to the romance aisle and the occasional biography grab.

Find her on Twitter (@mindandherbooks) and her blog, Min and Her Books (minandherbooks.wordpress.com).

I am so so honoured and delighted that she visited us at the Pond to share her words and her thoughts with us today. I loved Min’s post and what she had to say, and I hope you loved her piece, found it thought-provoking, insightful, and empowering as well. Thank you so much, Min!

2 thoughts on “Our Friend is Here! Pride Month Edition – A Discussion with Min, Book Blogger; Growing Up Sapphic in Latin American and the Issue of Complex Representation”