Since their parents’ strange disappearance several years ago, 12-year-old twins Mei and Yun have been raised by their grandfather, who makes the best mooncakes around using a secret ingredient.

On the day of the Mid-Autumn Harvest Festival, the emperor sends his son to sample Grandpa’s renowned mooncakes—but instead of tasting wonderful, they are horrible and bitter, strangely mirroring the odd, gloomy atmosphere and attitudes that have been washing over the village in the last few days. Grandpa is arrested for insulting and harming the prince, and Mei and Yun realize they are the only two people who will come to Grandpa’s aid.

The twins set out on foot for the long journey to the emperor’s palace where Grandpa’s being taken, but a surprising stop in the eerie City of Ashes, a visit with the legendary, mystical Jade Rabbit, and an encounter with a powerful poet whose enchanted words spread curses, influence just how Mei and Yun will manage to clear their grandfather’s name.

I received a digital advanced readers copy from the publisher in exchange for an honest review.

If you are looking for an action-packed, sweeping adventure that will keep you entertained and intrigued with its historical, fantasy, and even mystery elements, then look no further than The Dreamweavers, a lovely middle-grade historical fantasy releasing next month!

END_OF_DOCUMENT_TOKEN_TO_BE_REPLACED

Eleven-year-old Josephine knows that no one is good enough for her daddy. That’s why she makes a habit of scaring his new girlfriends away. She’s desperate to make it onto her school’s cricket team because she’ll get to play her favorite sport AND use the cricket matches to distract Daddy from dating.

But when Coach Broomes announces that girls can’t try out for the team, the frustrated Josephine cuts into a powerful silk cotton tree and accidentally summons a bigger problem into her life . . .

The next day, Daddy brings home a new catch, a beautiful woman named Mariss. And unlike the other girlfriends, this one doesn’t scare easily. Josephine knows there’s something fishy about Mariss but she never expected her to be a vengeful sea creature eager to take her place as her father’s first love! Can Josephine convince her friends to help her and use her cricket skills to save Daddy from Mariss’s clutches before it’s too late?

I received a digital advanced readers copy from the publisher in exchange for an honest review.

After reading Josephine Against the Sea, I felt like I had traveled all the way to the small village in Barbados where Josephine lives, and that I had gone on an unforgettable journey with her. Josephine Against the Sea reminds me so much of the middle-grade books that I used to read as a younger reader – a story filled with mischief, a little danger, but is ultimately a simple and fun adventure with so much heart.

END_OF_DOCUMENT_TOKEN_TO_BE_REPLACED

I’m so excited to share and tell you all about this wonderful book that I read very recently, friends. If you love stories that capture the thrill and joys of adventure, a story set entirely in Barbados, a satisfying sprinkle of Carribean mythology, and a good-hearted and mischievous heroine who meddles – and actually saves the day – then you will love Josephine Against the Sea by Shakirah Bourne.

END_OF_DOCUMENT_TOKEN_TO_BE_REPLACED

I love stories inspired by mythology. I love when mythology-inspired stories feel familiar, taking elements and ideas and motifs from stories that have stood the test of time, and telling them in a fresh, contemporary, and exciting way.

END_OF_DOCUMENT_TOKEN_TO_BE_REPLACED 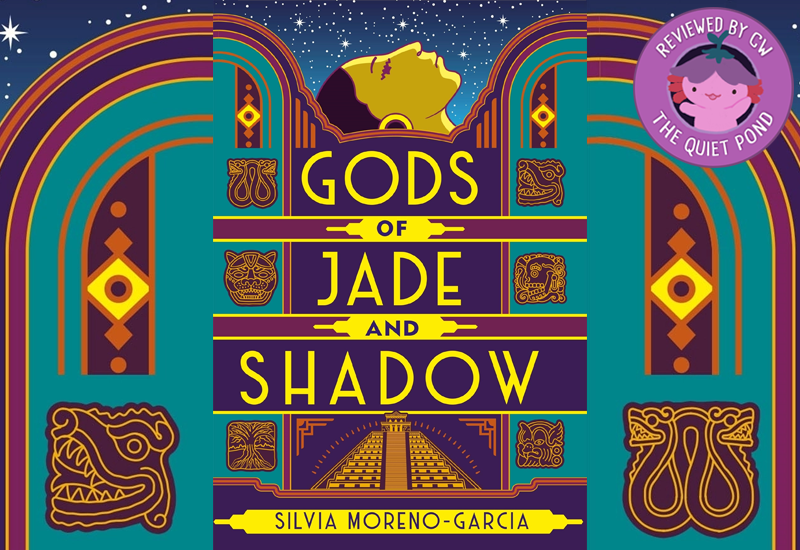 The Jazz Age is in full swing, but Casiopea Tun is too busy cleaning the floors of her wealthy grandfather’s house to listen to any fast tunes. Nevertheless, she dreams of a life far from her dusty small town in southern Mexico. A life she can call her own.

Yet this new life seems as distant as the stars, until the day she finds a curious wooden box in her grandfather’s room. She opens it—and accidentally frees the spirit of the Mayan god of death, who requests her help in recovering his throne from his treacherous brother. Failure will mean Casiopea’s demise, but success could make her dreams come true.

In the company of the strangely alluring god and armed with her wits, Casiopea begins an adventure that will take her on a cross-country odyssey from the jungles of Yucatán to the bright lights of Mexico City—and deep into the darkness of the Mayan underworld.

After I finished Gods of Jade and Shadow, I gently placed the book down on my pillow, closed it shut, tucked the book into its rightful place in my bookshelf, and promptly sobbed my eyes out. Because I wasn’t kidding in the title – as a reader, one of my greatest pleasures (and in extension, my greatest heartaches) is finding books that change me forever; books that challenge what I know what it means to love and feel deeply, break down what I thought I knew, and then elevate me by showing me a new and profound understanding.