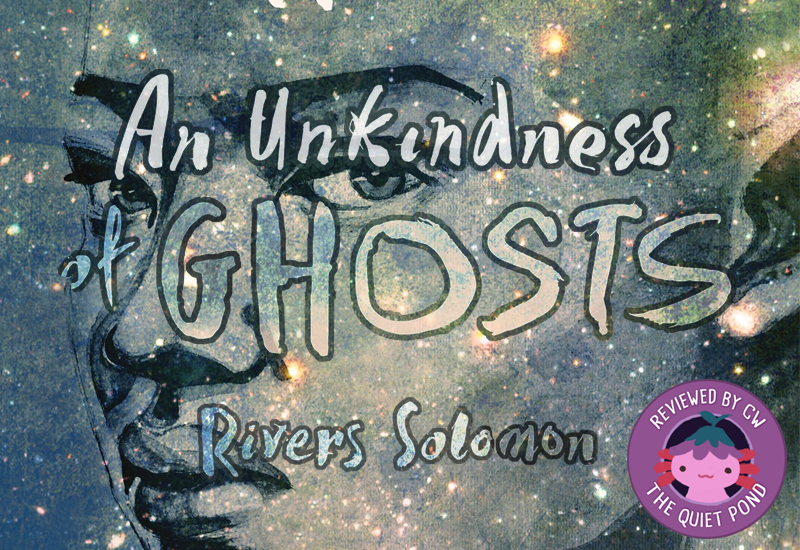 I’m going to be frank with you. An Unkindness of Ghosts is stellar, hard-hitting, but absolutely brutal, honest in its depictions of systemic oppression and its machinations. Second, despite the importance of what this book explores and its insightful storytelling and worldbuilding, this book is not for everyone – or, requires some emotional and mental preparation before delving into this rich and dark story.

The story follows Aster, a lower-class healer that lives abroad the HSS Matilda, a colossal generation ship that is carrying the remnants of humanity to the ‘Promised Land’ after Earth’s decimations centuries ago. Following the mysterious death of their leader, Aster finds herself the key to this mystery – and may be the tinder that will ignite revolution within the spacecraft.

Before I tell you all why you should read this book, I also think it’s important for me to start with the caveats. First, this book is not easy to read. It is harrowing, it is dense, and it is blunt and graphic in its depictions of violence (trigger warnings can be found at the bottom of my review). Please take care before you decide to read it!

Given the book’s multiple warnings, I do believe that this book is incredible. It’s insightful, powerful, and the kind of book that just sears into your memory. An Unkindness of Ghosts is truly unforgettable, and here are my five reasons why you should read this book.

1. A masterpiece of worldbuilding; layered, complex, and meaningful

Decades into her voyage, the HSS Matilda has become a highly stratified and hierarchical institution reminiscent of the antebellum Southern United States – and everything that is wrong with it. Through the eyes of Aster, we see the violence afflicted by those with greater power, those who live in the upper decks, and the immense disparity between the rich and high-class upper-deck people and the poor and low-class lower-deck people. However, we also see the different stratum within the HSS Matilda; their functions, their supposed ‘purpose’, how convention and normality are created (one part of the ship uses they/them pronouns exclusively for its people), and just the various and complex machinations within the ship. What you may discover aboard the HSS Matilda may not inspire optimism, but the worldbuilding is splendid and an achievement of this book.

2. The story is thematic and metaphorical

The worldbuilding in An Unkindness of Ghosts is thoughtful, from the structure of the ship as a metaphor of systemic oppression; the people living in the upper decks are prominently white, heterosexual, cis, abled, and of higher class, and are thus the arbiters of the spaceship, possess social capital and power, and perpetrators of physical violence and class violence. In contrast, the people living in the lower decks are prominently people of colour, queer, disabled, and lower class, and are recipients to all forms of violence, the proletariats of the ship, and are indentured to slavery. Narratives of slavery emerge across the rhetoric within the ship, making this book a multifaceted study on power and how institutions of slavery and segregation are upheld. In addition, the story also explores the complicity of religion in upholding oppressive regimes; how religious rhetoric is twisted into something that is violent, ugly, and justifies violence.

3. Led by a compelling story that ties personal and political history together

The story is led by Aster, a Black, intersex, genderqueer, and autistic healer from the lower decks of the HSS Matilda. Though the worldbuilding and the various themes of the book are prominent and distinct in the storytelling, the story is held together by the mysteries following the Sovereign’s death. What follows is a mind-blowing and a whirlwind of a story where Aster will unravel the mystery of, not only the Sovereign’s death, but also the death and suicide of her mother – eventually finding the truth of both, which will set off a chain of events that will change the trajectory of the HSS Matilda and its people forever.

4. There is no delight, no glorious cathartic release – but there is hope, and that matters

It is strange for me to list this as a reason to read An Unkindness of Ghosts but hear me out. As depressing and grim as An Unkindness of Ghosts may be, something that I did like (in a twisted sort of way) was that this story doesn’t pander to the optimistic and happy ending that readers may crave after reading this dense book. Though the story ends in a way that may prompt more questions than answer them, I liked that this story didn’t ultimately follow a hero-saves-the-day sort of story structure, as much as I hoped the best for Aster and her people for all the pain that they had endured. Rather, this story is matter-of-fact, true to Aster’s characterisation and the trauma experienced by core characters, and the climax of the story is meaningful. At its heart, I think this book is about how freedom is absolutely necessary but comes at a devastating cost – and how this, in a way, is still hopeful, still important, and still necessary.

5. Has #ownvoices representation for queer and neurotypical identities

There are several characters in this book, but the ones that you will come to know are mostly queer and neuroatypical. Aster is implied to be autistic, and her autism and the way she perceives and understands the world around her shapes the outcomes in her story. She is also genderqueer (and uses she/her pronouns), and how she examines and performs aspects of her identity is shaped by the institutions on the ship (in particular, how she grapples with violence). Noteworthy and also fascinating is that the identities of the lower-deck people on the HSS Matilda have greater diversity, whilst those living in the higher-deck are bound to stricter, more religious, and heteronormative standards and ideas of gender and ability.

MY CONCLUSION: RECOMMENDED, WITH CAVEATS

Premise in a sentence: A lower-deck healer aboard a generation ship becomes central to the mystery surrounding the death of the ship’s leader and the suicide of her mother.

Perfect for: readers who love complex science-fiction; readers who are intrigued by the narrative on systemic oppression and slavery; readers who want to read #ownvoices representation

Think twice if: you cannot handle a heavy read right now; the below trigger warnings will pose a risk to your safety; you don’t enjoy books that are thoroughly and wholly depressing; readers who aren’t interested in science-fiction

Phew, this is a tough book but it’s also a spectacular book, one that is wholly deserving of being a finalist Lambda Literary Award for Science Fiction, Fantasy, and Horror. I do think, however, this book is not for everyone. Reading this book depressed me, even though I appreciated it nuances, so please consider carefully before choosing to read this book!

6 thoughts on “Five Reasons To Read: An Unkindness of Ghosts by Rivers Solomon – A Brilliant and Unforgiving SFF Portrayal of Systemic Oppression Aboard a Generation Ship”